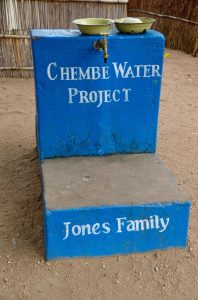 There used to be a high incidence of preventable water-borne diseases such as cholera and dysentery, which led to both morbidity and mortality in local communities, especially in children under five years of age.  The proximity to the lake in these communities make wells and bore-holes unsafe as well because of the high-water tables during the raining season, leading to contamination of deep-drilled water sources.

The Chembe Water Project uses pumps to pull water out of the lake from 150 meters.  The water is first sent through a particle filter to remove any debris and sediment.  Next, the water passes through a state-of-the-art ultra-violet treatment system to eliminate any disease-causing bacteria, viruses or microorganisms.  The water is stored in major tanks throughout the village which then supply community taps with a consistent flow of water.

2006 – Chembe Water Project placed 7 water-taps throughout Chembe Village in April of 2006.  These taps deliver clean water to the village daily, and provide the entire village of Chembe with safe-drinking water.

2008 – 20 more taps were installed at the far end of the village where Chembe is most densely populated and doubled the number of people with access to safe drinking water in the area.