The Hunger Relief program was started out of need in 2006 when Malawi suffered greatly from a year of drought and failed crops. The program was started as a means to assist the people affected worse and were left with nothing to eat. Maize is the staple food for Malawian families. In the unfortunate event of crop failure, the family is faced with the unlikely challenge of surviving an entire year until they get another chance with the crop the following harvest year.

Hunger Relief began as a subsidized feeding program that assists the most vulnerable people in the village during the ‘hungry months’, a time when last year’s crop is finished and the new crop is not yet harvested.
The Project Centre collects monetary donations to purchase bags of maize at full price, and sell it back to selected families at a reduced price through a village co-op program. In 2010, the program fed almost 4,000 people in an 8-week period.
The sales and amounts sold are being monitored by our project manager Mike to ensure the distributed maize is going to those who need it most.
The number of people positively affected by those food drives numbers over 14,500. 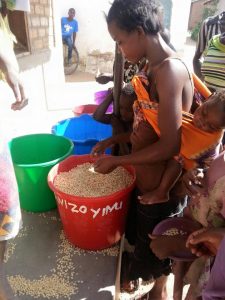